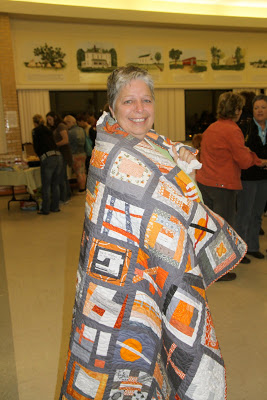 One perk of being an officer for the KCMQG is getting to have some input on potential guest and meeting programs. We have discussed and contacted many different quilters across the country and were excited to get the chance to bring Susan Beal to Kansas City! Susan came and gave a presentation on modern log cabin quilting at our September 8th meeting.
Susan resides in Portland, Oregon with her husband and two children, and is a member of the Portland Modern Quilt Guild. She is a freelance writer whose books include Bead Simple, Button It Up, Modern Log Cabin Quilting and World of Geekcraft, among many other writing projects she’s involved in. In her spare time, she loves to sew vintage dress patterns, knit, embroider, and make collages, among many other interests.

I have been a long time blog follower of Susan’s and it was her blog that I used to plan my fantastic 30th LA b-day trip a few years ago (we won’t mention exactly how many years). Susan is a life long crafter and one of the nicest people you could know. I feel like I have known her my whole life, although we just met this past July.

I picked Susan and Everett, her son, up at the airport at 11:30am, which means they were great enough to leave Portland at an insane hour of the morning. It was a great excuse for me to take a day off work and hit up some of my favorite Kansas City places. We started with a stop at Urban Arts and Crafts. I was tempted by many fabrics, but showed some restraint and walked out empty handed. Susan found some great Denyse Schmidt pieces there. Then we went for lunch at Bluebird. It was a perfect day to eat outside and little Everett enjoyed some polenta with me. He was such a good companion. After that we were on our way to Westport, via a stop at Hammerpress. Gosh, they have some great things! I picked up issue ten of Uppercase, which is quite possibly the best publication I have gotten in a while. Our intentions were to head over to Bon Bon Atelier, but our little friend needed some floor time and Susan and I were both tired. So we made our way back to my house. Susan was able to have a little down time before the meeting and I was able to finish some last minute quilt blocks before we were off again. We met Jenny and Jacquie for dinner at Eden Alley, then Everett went to my lovely friend Julia’s house to play with Hannah. At last we arrived to the buzz of the KCMQG meeting! We were greeted by so many wonderful faces and I think Susan felt at home. Susan gave a fabulous presentation on log cabin quilting after a busy meeting of business matters. Thank you all for waiting and being so gracious.

The next morning Susan and I met Jenny at the Bernina Sewing Center in Overland Park. Susan and Everett were off for more adventures including: Harper’s Fabrics, Bon Bon and the Nelson-Atkins Museum of Art. Here’s a photo of the spoils Susan took home with her!

I think Susan told me thank you no less than 100 times, but truly we are so thankful to be able to share our city and love of quilting with you! Susan, you are an inspiration to us and we hope to see you again in our quilty futures.

Susan wrote her own blog post about her trip and adventures in Kansas City. Check it out here!

The Kansas City Modern Quilt Guild and the Portland Modern Quilt Guild are participating in a guild swap! 26 members of the Portland Guild paired off with 26 lucky members of the Kansas City Guild for a log cabin potholder exchange. The KCMQG literally fought for spots, considering there’s over 100 of us! Look for more info on this swap exchange in the future!

On a different note, the KCMQG bid a fond farewell to guild-founder and long-time president, Jacquie, who is now calling Chicago home. The Guild came together in an amazing feat of block-making, to produce (in six short weeks), a large quilt comprised of 6″ blocks from the members. If you’d like to read more about the making of the quilt, visit Shea’s blog post.

“I could write for days about her contributions to our guild and the Modern Quilt Guild at large, but I’ll stick to this: it is extremely rare to find a kind heart, inspiring creativity, meticulous craftsmanship and a genuine desire to learn alongside others as character traits in one person. But Jacquie is that, for sure. Her influence and contributions to the KC guild will be felt for years to come. (and I am still holding out hope that she’ll come back one day!)” ~ Shea

Jacquie, we sure will miss you! But we wish you the best and will always hold you close in our hearts. P.S., you better visit! ?